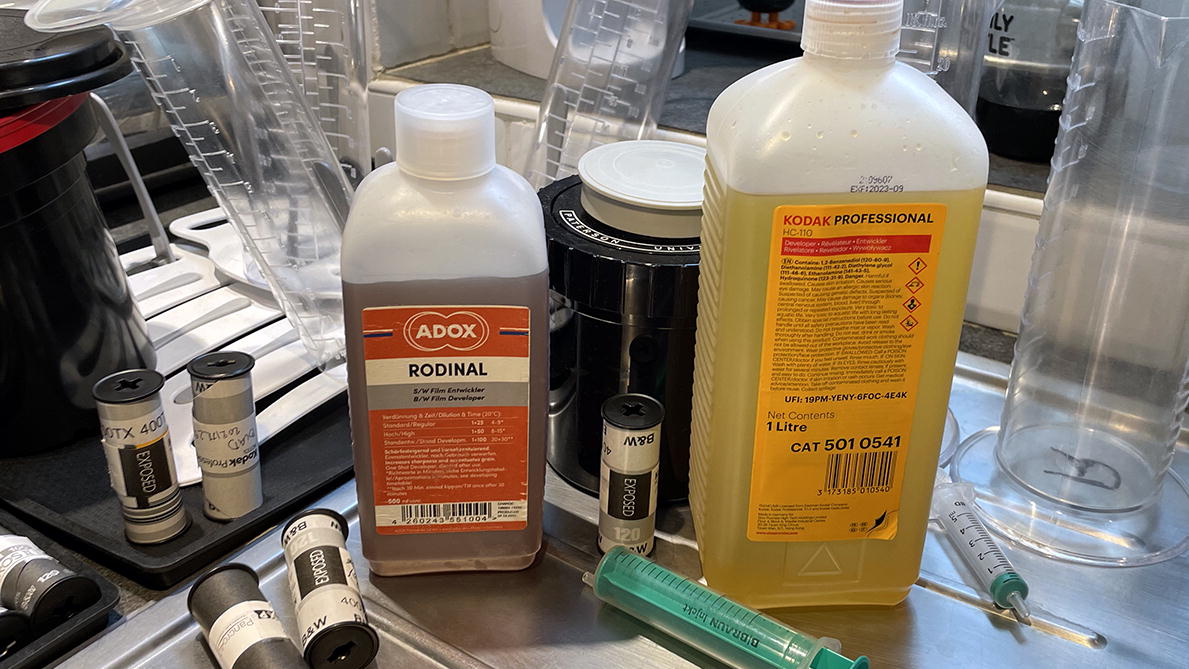 The stand-dev(elopment), or slow development, or without agitation, is a method of development of black and white silver films, even color. The practice is very easy, and allows a good exploitation of the high and low lights, as well as possibly of different views exposed with different sensitivities.

This process was popular in the late 19th and early 20th centuries, and was used by Eugene Atget or William Mortensen, among others. It has a compensating effect in that the developer is depleted in the areas that need more development while remaining active in the less exposed areas, thus enhancing shadow detail while preserving the highlights.

In traditional developing, the film is processed in a concentrated developing solution for a short period of time, usually 8 to 12 minutes. During this phase, the developer is agitated, often by inverting the developing tank several times every minute. This has the effect of distributing the developer evenly over the film surface and preventing localized overdevelopment. Slow development uses instead a very dilute solution of developer, often one part developer to one hundred parts or more of water. There is virtually no agitation beyond the initial mixture, and development times are much longer, often an hour or more. A version of this technique is semi-standard development, which uses a small amount of agitation, usually halfway through the development period.

Why stand-dev is so successful nowadays?

The stand-dev is known for its relative simplicity. Indeed, very little developer is used (economical), you don't have to stay several minutes to watch the time and the agitation, and the temperature doesn't matter. This technique is also very insensitive to exposure variations and allows the development of views at different exposures on the same film.
In short, as opposed to hyper-precise development where everyone is looking for the ultimate grail, with no margin of error, this little alternative side is, I must admit, exhilarating, especially since it works very well!

If we resume, here are the specificities of the slow development processing: In short, quite a few advantages when the development is not of absolute scientific criticality!

Without agitation, slow development can suffer from the appearance of so-called "bromide drags". During development, bromide ions are produced which, without agitation, slowly migrate to the bottom of the tank. In doing so, they create uneven development streaks on the film surface. Typically, for 35mm film, the film's sprocket holes often accentuate these streaks, which would have been masked by more agitation.

Sometimes, the negatives seem too low contrasted (flat), the semi-stand-dev allows to increase slightly the contrast.

Which films to use?

A priori all the current black and white films you will find.
Scoop: it is even possible to develop color films in this way, the colors will not be rendered but the exploitation in black and white is totally possible. Below, semi-standard Kodak Portra and Gold with HC-110 developer at 1+100.

Which film developers to use?

Here, you must not make a mistake. Even if it could work with the most common commercial developers, the best results will be obtained with the Adox Rodinal, the Kodak HC-110, the Foma Fomadon R09 or the Ilford LC29.
In general, manufacturers recommend not to use less than 5 ml of developer solution per film (135 or 120).

Concerning the temperature, no particular recommendation, between 18 (64.4°F) and 26 (78.8°F) Celcius degrees without worries. Just make sure that all the baths are identical to avoid termic shocks, especially from too hot to cold.
Measuring a few milliliters of developer is not easy, get a syringe from a drugstore, for example.
The protocol described below is equivalent for my part for all black and white and color C-41 films.

To start with, keep it simple, with semi-stand-dev (stirring at half time, and thus avoiding bromide-drags):

For the rest, namely the stop bath and the fixing, follow my development technique to finish.
And if you would like to scan your films by yourself, I suggest you digitize them in high-resolution with your digital camera in this specific article.

Denis, do you use slow development yourself?

Yes, of course, all the images in this article are developed with this technique, but I don't use it all the time, and I use only semi-stand-dev.
I mainly use Rodinal at 1+500 (for a 120 film).