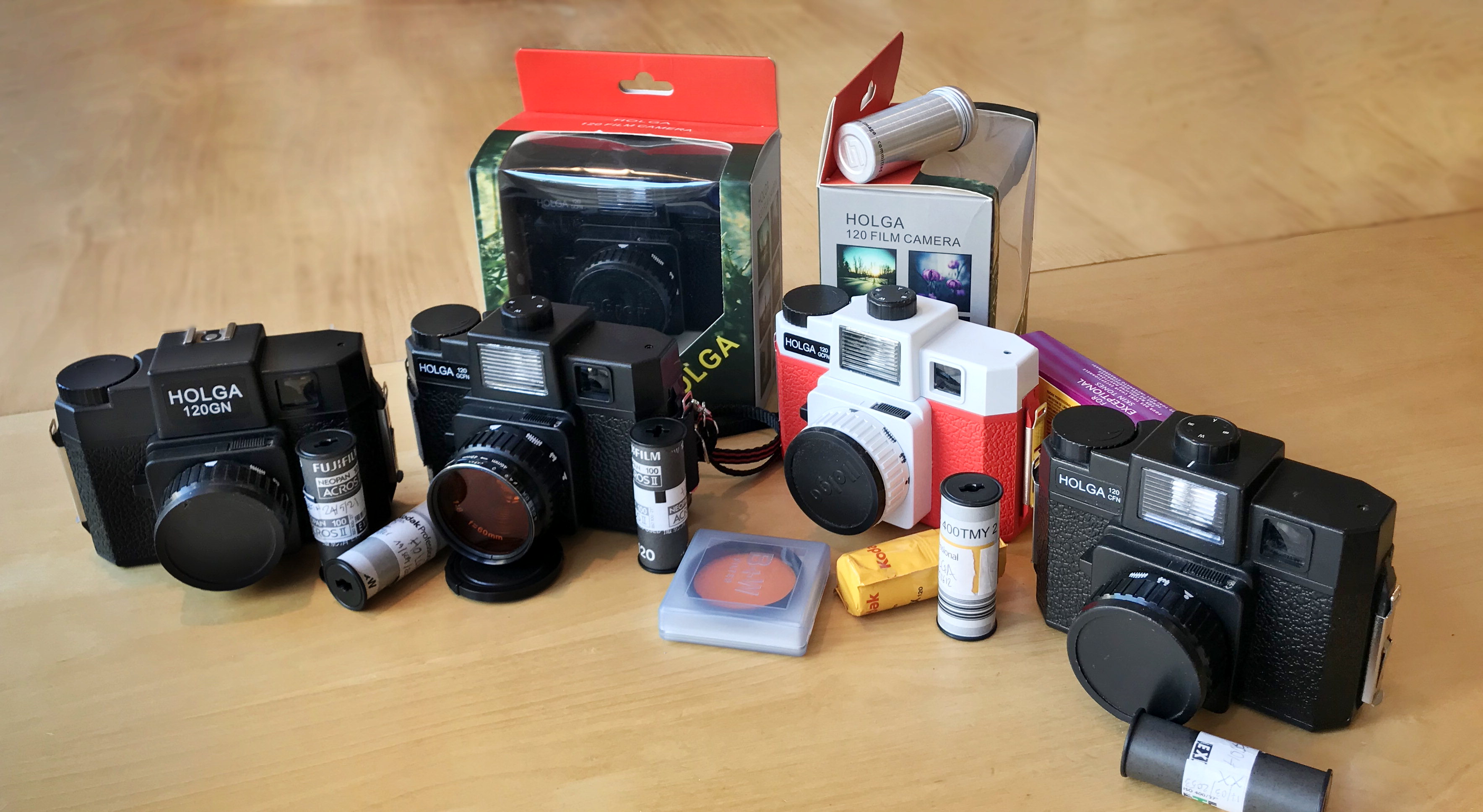 The Holga 120 is a consumer toy camera, simplistic and all plastic, using medium-format 120 film, but totally singular and fascinating, removing the technicality to give way to surrealist creativity. Learn how to use it, modify it, even customize it and discover why this icon has become cult in the culture of photography in just a few decades.

The first Holga manufactured in Hong Kong in 1982 was a basic medium-format camera, very simple and light, totally made of molded plastic (including its lens) and intended for the general public.

In the field of photography, the Holga is part of the category of "toy cameras" grouping together the simple and inexpensive film models such as the Diana, the Lubitel, or the Lomo.

Over the years new versions have appeared, the most successful being the GCFN, with 2 apertures, a glass lens, an integrated flash, a B mode (bulb) and a tripod mount.

Its production stops in China at the end of 2015.
In 2017, the Holga 120N made a comeback, after Freestyle Photographic Supplies procured old molds from a disused Chinese factory to restart its manufacture.

Why such a success for the Holga?

Due to its poor initial quality of manufacture and finish, the body often lets light pass or reflect in various places, producing blurry images with little fidelity, characterized by strong vignetting, distortions, light reflections and other marked loss of sharpness.

With a small simple viewfinder without focusing, one or two shutter speeds, a fixed aperture and 4 areas of sharpness to be selected without visual verification, the results are often hazardous and disappointing.

The simplistic design, light and basic construction makes each Holga different, making each shot random, offering an estimate that will be more or less successful during film development.

It is precisely for these reasons of uncertain rendering and apparent ease of shooting that the Holga has become cult, in particular by producing low-tech, artistic, mysterious, poetic images, enhanced by the use of film and further development possibilities.

Its success is also explained by the simple possibilities of adaptation, modification and personalization of the case, making each Holga even more unique and personal.

Photographing with a Holga must be done in full awareness, leaving little room for control, requiring to forget the technical aspects by focusing on the image, the framing, the subject, because each shot is a challenge .

In our digital age, overwhelmed by the massive production of very crisp and faithful images, which are immediately available, this allows you to abandon yourself to spontaneity, to the chance of imperfect and surprising shots, to the time of waiting between the shooting and the revelation, to the dreamy magic of the so singular rendering of this fascinating device.

Each successful photograph is often a surprise and delivers a unique feeling of having been personally touched by photographic grace.

Initially, the Holga has a shutter speed and an aperture.

The lens has a fixed focal length of 60mm. Its initial aperture was fixed at f/11, the most recent versions have been modified to have two apertures, f/8 and f/11.

The shutter speed is also fixed, approximately 1/100 of a second.

The type of film used is 120 medium format, producing an image format of 6x6 or 4.5x6 centimeters through caches. It can be modified to accept 135 film in 24x36 millimeter format.

Which films to use?

All 120 films can be used, but be careful with films that are too thin, which have an annoying tendency to roll up badly and relax.

For the sensitivity, the 400 ISO negative black and white is more tolerant to exposure variations and therefore easier to use in various light conditions.
ISO 100 films should only be used in strong sunlight, in spring and summer when the sun is direct and high in the sky.

The medium-format 120 film, positive or negative, black and white or color must be handled with care, the latter not being inserted in a protective cartridge like the 135 (35 or 24x36 mm).
Only an opaque paper tape comprising frame numbers for different formats and film start marks is wound behind the film and protects the film along the entire length.
The film 120 is wound up on an axis comprising at the 2 ends of the discs making it possible to guide the film but also to ensure the tightness against the light, which obliges to stretch the film to ensure a winding tight and homogeneous.

When loading, take care to stretch your film well, blocking the unwinding of the film from the new reel with a finger (your thumb for example) while you turn the reel on the other side.
If your film is badly rolled up and / or relaxed, beware of the light curtains on the sides, I advise you to take it out in the dark and protect it from any light source as long as it is not developed.
In this case, you must either change the film or rectify your Holga to increase the tension of the film during its unwinding, and therefore winding.

Try as much as possible to load the film in a dark place, just like a camera. But even more with the Holga which can let the light pass in various places and veil the first sight if you're not careful. Same recommendations for removing the film, because it is still not obvious, avoid performing this operation in direct sunlight.

Progress of the film

As there is no locking of the arming of the shot, a matter of taste! Some prefer to move the film forward and take the shot, others take the shot and advance to the next frame. Make your choice and stick to it, it will save you from either skipping views or making overprints (double exposure).

If you have not protected your Holga against light leakage, and unless you wish to allow these unintended effects to appear in your photographs, be careful not to expose it to strong light sources, such as the sun. This is especially necessary with the back and its red frame tracking window, you may end up with the numbers printed on the protective film of the film on your shots. When I wear it in my hand, my thumb always covers this part if it is not protected.

Me the first, again, sometimes I make this mistake. Nothing is more depressing than to find "black" views or to notice it too late! Some even stick a mention to this effect on the back of their device.

Since the film does not advance alone with the Holga and there is no arming lock system, it is very easy to make multiple exposures, just press the shutter release several times in a row. On the other hand, this apparent simplicity hides some obvious things to keep in mind to avoid overexposed photographs.

Make sure, as with loading, to perform this operation in a dark place, or even totally dark if possible.

Take care of your Holga

Yes, it's a cheap camera, but it's still a camera with its mechanics, its lens and its fight against dust.
Remember to regularly clean your Holga, the viewfinder, the lens, and when you're not using it, keep it free of dust and other impurities that the air carries. These will tarnish the optical elements and will eventually end up on your film.

Modifications to the Holga 120

Keeping the back in place

With the Holga, the rear back doesn't always hold up very well. Metal clips are succinct and can move under impact leaving the back slightly open, with all possible consequences including light leaks.

For this I put on the bottom of the case, and on its back 2 pieces of repositionable adhesive tape and thus avoid unpleasant surprises.

If you lose your metal fasteners, you can find them on eBay, Amazon or a few specialist sites.

If you want to reduce the surprise lighting effects on your films, you can paint the interior of your Holga with a non-reflective matte black (flocking). It will be necessary to protect the vital parts of the shutter, thus as the red window in the back to monitor the progress of the film. Of course, you have to paint the inside of the mask 6x6 or 6x4.5 as well.
Be careful, however, not to paint the back of the cover where the film presses when sliding, as this will most likely scratch it. 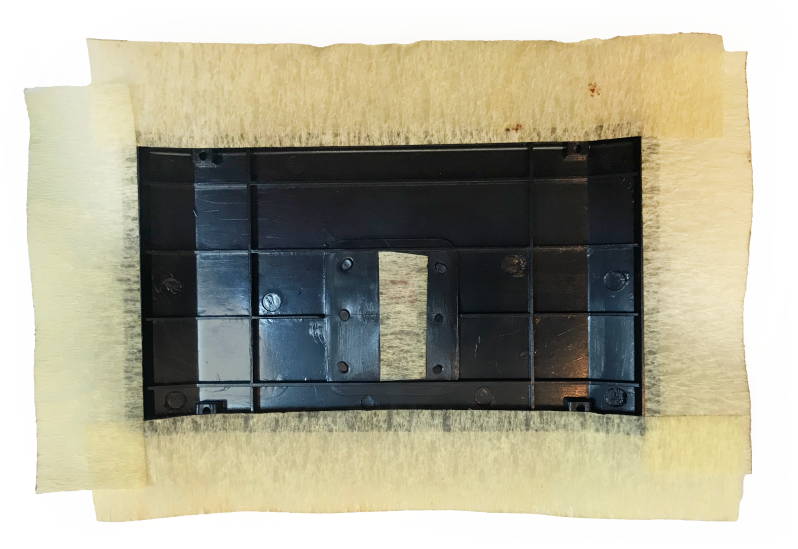 Preparation and protection of the back of the Holga 120 for flocking with matte black paint. 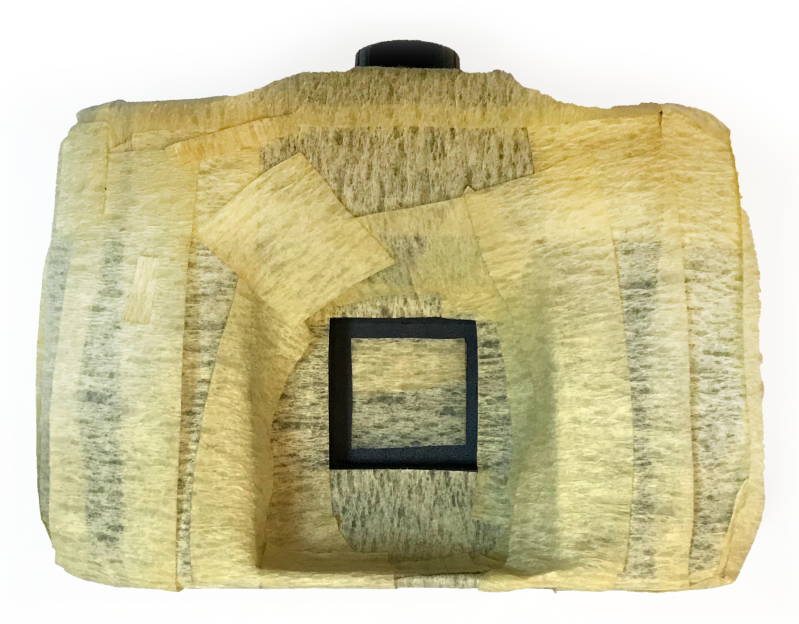 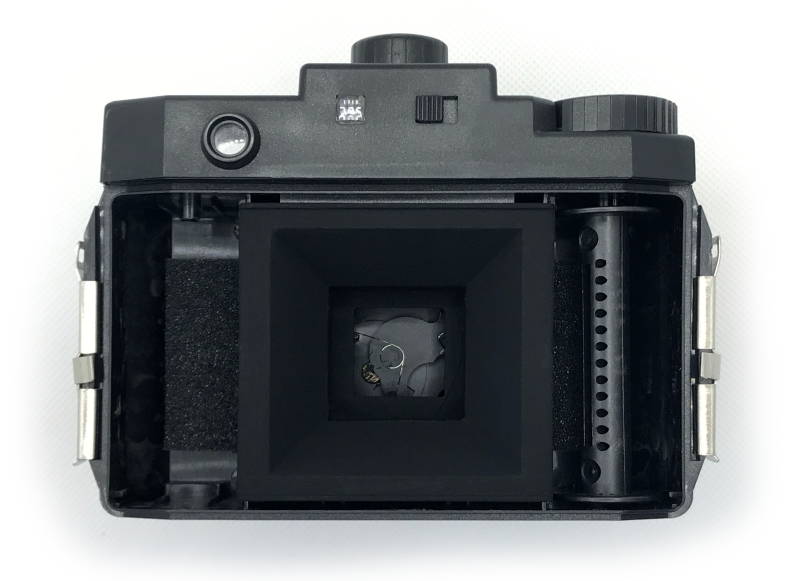 Finishing the 6x6 mask and the chamber with Black 3.0 paint, which absorbs between 98 and 99% of visible light.

In order to obtain various effects, but especially for me to contrast the shooting, it is possible to add a filter support to the Holga. Some are created specifically for the latter, but more often than not accept as square filters to slide into a slot. For my part, I added a screw-on filter ring from 46 to 49 mm. All you have to do is screw the ring on the 46 mm side onto the lens of the Holga. It's not always easy, you have to sometimes force it a little and eliminate plastic to find the right pitch. Once the latter is optimal, I fix the ring with a cyanoacrylate glue permanently. You will then need a new lens cap which should be able to hold better than the initial one. 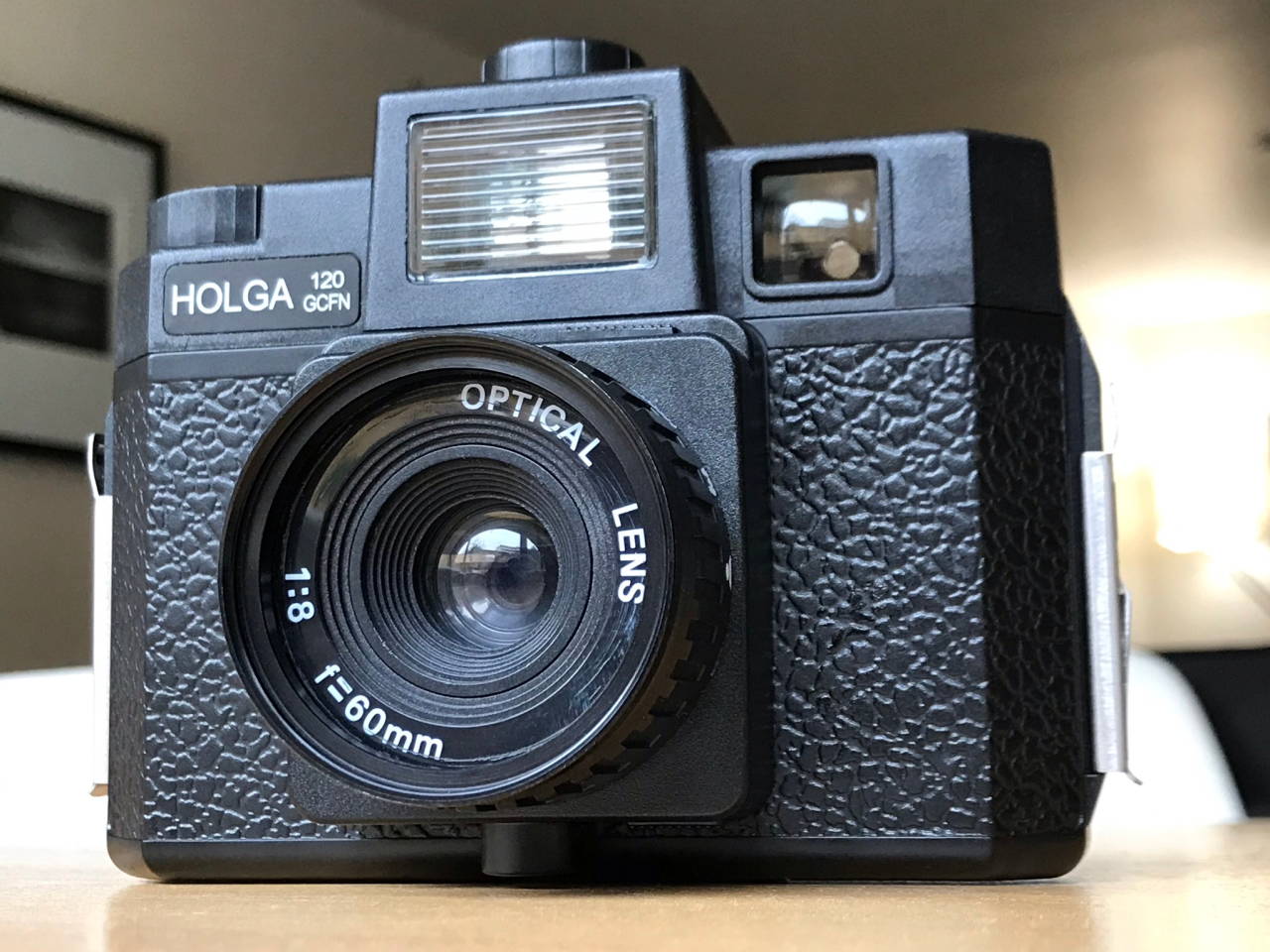 Front view of a Holga 120 GCFN with a 49 mm screw filter holder. 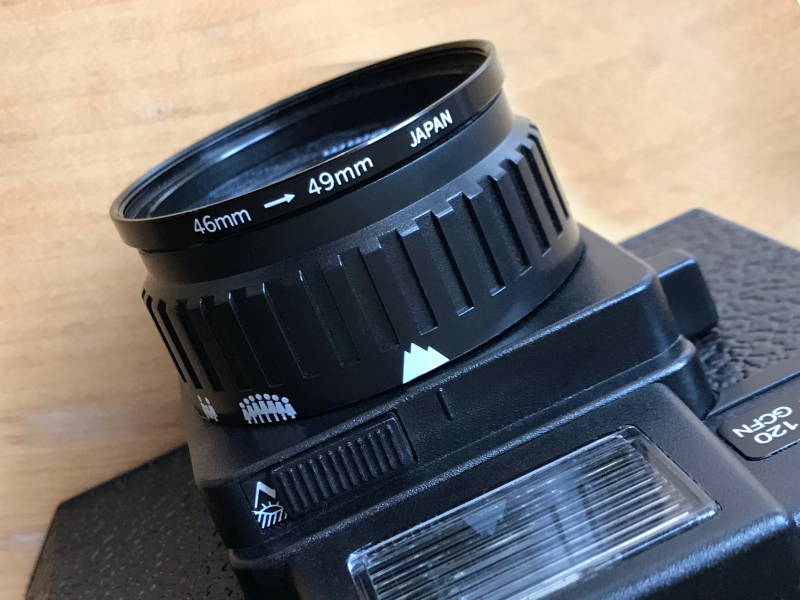 Increase the tension of the film

Film tension is sometimes problematic, especially with thin films such as those from the FOMA brand. Besides the fact that the film can be warped when it comes out due to an insufficiently tightened reel, the lack of tension sometimes also causes the untimely advancement of the latter, shifting the views and increasing the risks of errors and overlap. Several techniques exist, and I opted for the pieces of smooth foam at the back of the case, allowing to brake the film enough to increase the tension at both ends. 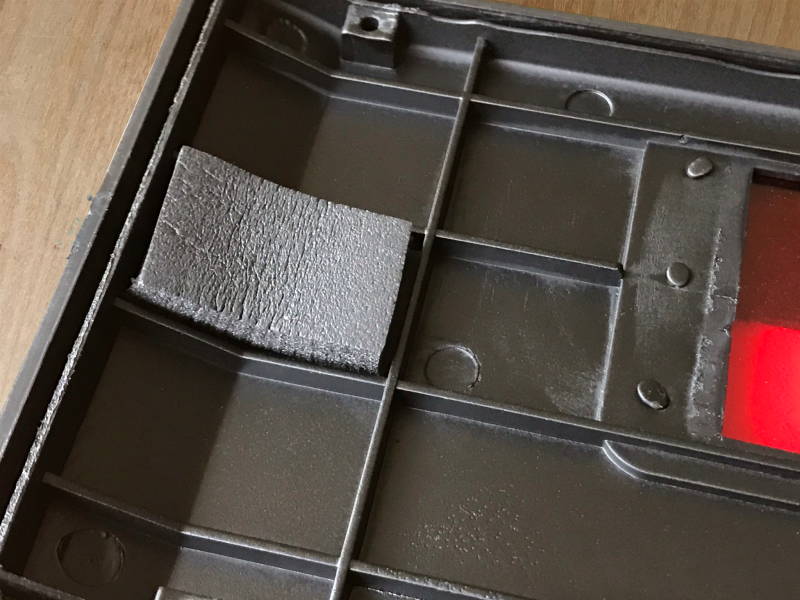 Left side of the Holga 120 back with foam for film tension. 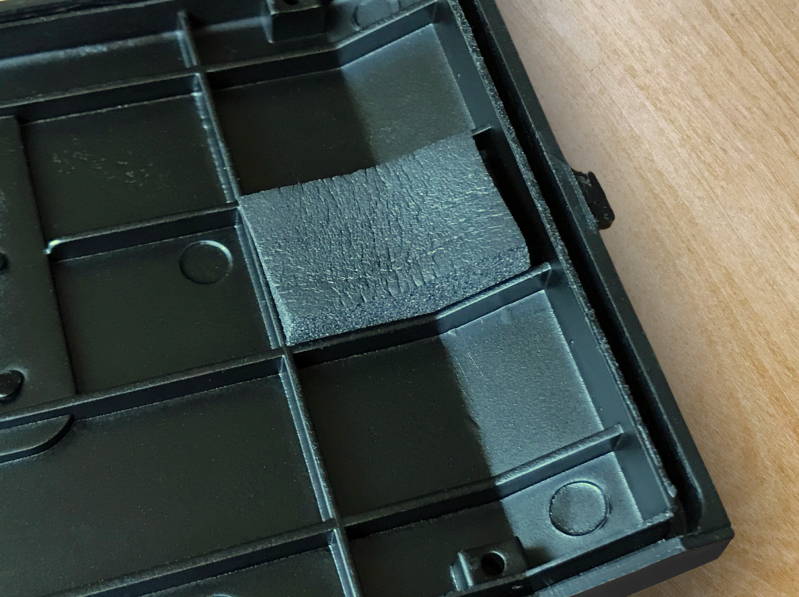 Right part of the Holga 120 back with foam for film tension.

Secure the back with Velcro

This modification keeps the back in place and opens it without too much difficulty. It also helps prevent metal clips from slipping, especially when the strap is attached to them.
For my part, I found a fairly large self-adhesive Velcro strip on eBay that I simply cut out with scissors before attaching them to the case. 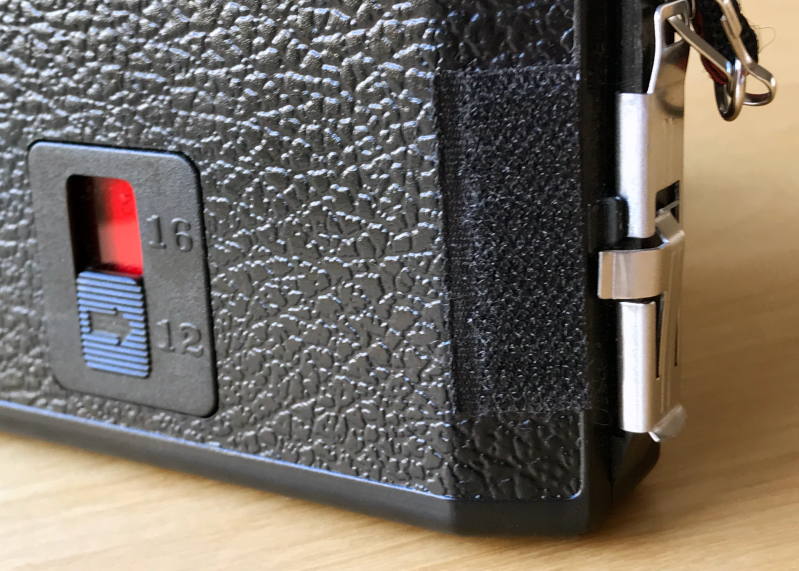 Velcro grip tape glued to the side of the back of the Holga. 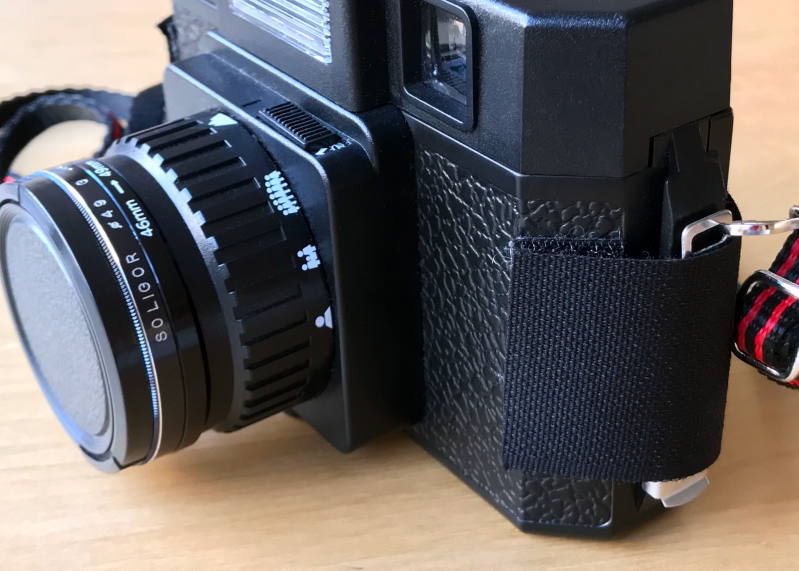 Secure the Holga back and attachment clips.

This is to prevent light leakage through the rear film position tracking window, especially in bright sunlight or inadvertently.
I found, on eBay, a self-adhesive webcam protection cap, which I secured with cyanoacrylate glue to avoid losing it. Beware, it's hard to use the view for 16 frames in this case! 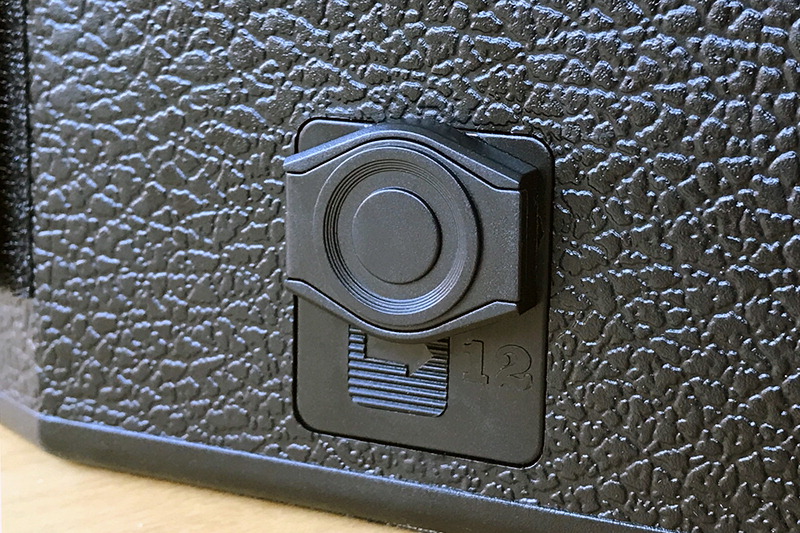 Closed protective cap of the film frame number position window on the back of the Holga. 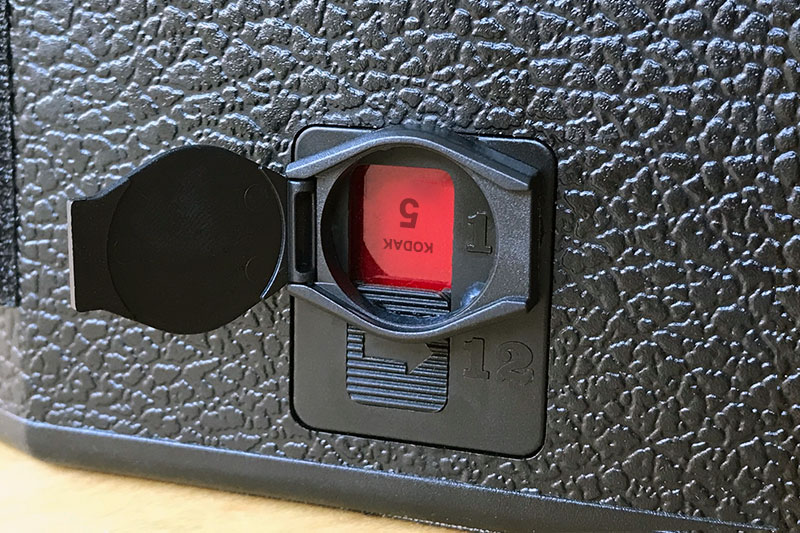 Opened protective cap of the film frame number position window on the back of the Holga.

Many other modifications exist, which I have not carried out personally, not feeling the need (yet):

You can see the whole gallery here.

If this article has helped you progress or enlightened you on certain points, that's the goal, mission accomplished!
Others might be interested too, so don't hesitate to share it : Finally, if you feel like it, leave a message below, it's always nice to have a feedback.

Thank you very much and good continuation to you.